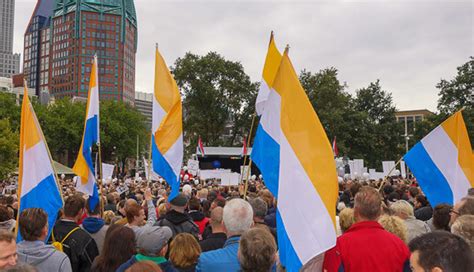 The ‘prinsenvlag’ or prince’s flag, is a flag with the colours orange, white and blue. Therefore it has also been named “oranje-blanje-bleu”. The flag was first used in the 16th century during the Eighty Years’ War by so called Orangists, whom supported the prince. In the 1930s discussions surrouding the reavulation of the national flag of the Netherlands left many parties divided, except the National Socialist Movement (NSB) who unanimously supported the prince’s flag. It is believed that this played an important role in the decision that favored the alternative, the current red-white-blue flag. Later on, the prince’s flag has been used by nationalist groups, whom use the flag to symbolize their desire for a united country consisting of the belgium region of Flanders and the Netherlands. This hypothetical country is also known as Groot-Nederland or Dietsland. The prince’s flag is regularly seen at demonstrations of the far right and extreme right. This includes the PVV demonstration last month on the 20th of January 2018, where multiple prince’s flags were present.